Since its birth, the history of the Ancient City of Sutri mixes reality and legend, in the succession of great civilizations that have made it one of the most important centres in all of Tuscia and the whole peninsula. The rich history of Sutri has come down to us in written form, through the archaeological finds, and especially through the surviving monuments and testimonies which you can still admire inside the Old Town today.

The legendary foundation by the god Saturn, the development with the Etruscans and the historic Donation by Liutprand are just some of the events of the past that you can learn about below.

Know the history of Sutri

The origin of Sutri

The Ancient City of Sutri (formerly Sutrium), stands on the relief of tuff overlooking the Via Cassia. Its origins are very ancient, probably dating back to the Bronze Age. As evidence of this, there are numerous fragments of vases which indicate the presence of man as early as the tenth century BC. The foundation of the city, still not fully clarified, is to be attributed to a people of oriental navigators, the Pelsgians; local legend, however, credits the work to the god Saturn, represented in the municipal coat of arms.

The small rural centre developed slowly under the influence of the Faliscan, spread throughout the area, until they were conquered by the Etruscan.

Being at the base of the Cimini Mountains complex, the city under the Etruscans developed along a corridor connecting southern Etruria and the Tyrrhenian Sea, the road axis connecting Rome to the northern territories.

From the 5th century BC, the central role of the city began to take shape in relation to the clashes between the Romans and the Etruscans for control of the territory, until it was finally conquered in 383 BC by the Romans. Under the Roman Empire it assumed an important military and strategic role (it was in fact called the Gate of Etruria); thanks to the construction of the Via Cassia and the end of the Etruscan wars, Sutri flourished.

The Donation of Sutri

After the collapse of Rome the city became a centre of reference and transit to and from the Urbe (Rome). Between the 5th and the 8th century, Sutri was involved in the battles between the Lombards and the Bizantines: in 568 it was taken by the Lombards, but immediately recaptured by the Bizantines. Once again under Lombard control thanks to King Liutprand, in 728 it was donated by the same king to Pope Gregory II. This donation, called The Donation of Sutri, represents a historical event of enormous value as it is considered the beginning of the temporal power of the Church, which is the first step in the construction of the Heritage of Sancti Petri and consequently the State of the Church. From this moment on, Sutri becomes an important bishopric.

From the Ecumenical Council to the present day

The importance of the city was the basis of the choice of Sutri as the seat of the Ecumenical Council of 1046 called by the Emperor Henry III to end the ‘schism of the three popes’, Benedict IX, Gregory VI and Sylvester III; after they were deposed, the Bishop of Bamberg Pope Clement II was elected.

At the beginning of the 12th century, the city was the site of an agreement between Emperor Henry V and Pope Paschal II known as ‘Iuramentum Sutrinum’ in which the struggle for investitures was called to an end.

The fifteenth century proved to be a nefarious period for the city. In 1433, during the period of the struggles between Guelphs and Ghibellines, the mercenary captain Nicolò Fortebracci started a fire that seriously damaged the Old Town, which was finally destroyed in 1493 after a violent flood – to date, only a few elements remain, such as the Arraggiati Tower and the Fortebracci Tower.

Sutri remained part of the Papal State until the proclamation of the Kingdom of Italy in 1861.

Learn about the Legends of Sutri 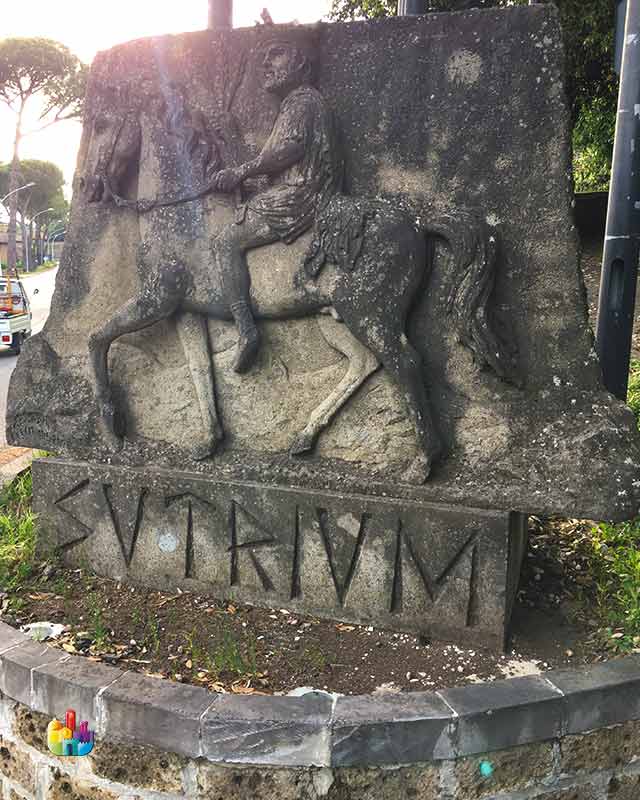 The legend of the god Saturn

According to a legend, Sutri was founded by Saturn, an ancient deity also worshipped by the Romans, who believed him to be a native of Greece. Saturn was connected to agricultural work and the rural world (in Latin,satus indicates ‘sowing’), a theory confirmed by some of his representations holding a scythe.

From its Etruscan name, Sutrinas, it is thought to derive the name of the city. In the city coat of arms appears in fact Saturn on horseback, who lays down his sword and raises a bundle of wheat ears, a symbol of the fertility and abundance of the land of Sutri. As the centuries went by, the city acquired the name ‘Antichissima’ (very ancient, Ed.).

Leaving Sutri and walking for a kilometre along the Via Cassia towards Rome, there is a cave with two rooms supported by a column; tradition has it that Orlando Paladino was born here.

Legend has it that Bertha, Charlemagne’s sister, fell in love with Milone, a heroic but untitled leader, and that the angry king drove them out of the court. Milone was forced to go to Rome to ask the Pope for help and during the passage to Sutri, Bertha gave birth to Orlando. During a stop in the city, Charlemagne (to whom the ruins of the castle are thought to be connected) recognized his sister Bertha, wanted his nephew by his side, and Orlando became Paladin of France.

Discover the monuments of the History